Every component used in the security pipeline is interface based, and these interfaces are wired-up via a dependency framework of your choice. You can thus easily replace any component. The extensibility doesn’t end just there – the implementations of these interfaces declare their methods and properties as virtual so you can easily change the behavior of any member without having to implement the whole component yourself. This DI based design additionally serves a crucial goal of testability in component design, which aids in seamless automated testing. 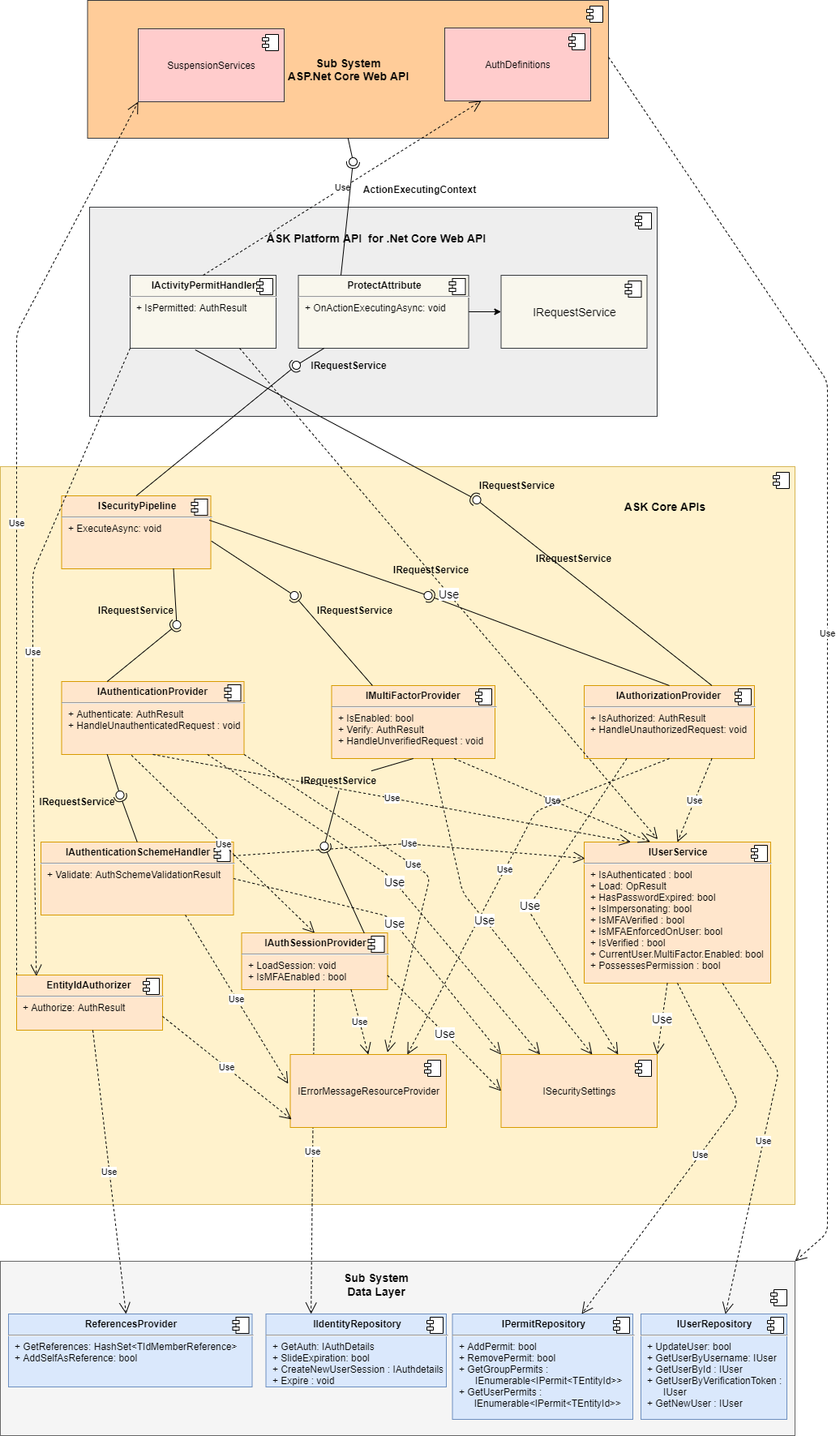 For example, even the error messages returned by ASPSecurityKit for various security failures is based on an interface and the implementation of which declares different messages properties as virtual.

The models and repositories used by security components are declared as interfaces, for example, IUser<TId>, IUserRepository<TId>, IAuthDetails, IIdentityRepository, IPermit<TId>, IPermitRepository<TId, TEntityId>. This gives you ultimate flexibility to declare the model the way you want, with validation and other attributes on properties for example, and implement repositories with the database and data access technologies of your choice.

Components of the security pipeline have first-class support for both synchronous and async executions, so you aren’t forced to choose a particular one just because the other isn’t supported.

The core ASPSecurityKit library is platform or framework-agnostic and it implements the core components such as UserService, AuthSessionProvider, SecurityPipeline, AuthenticationProvider, MultiFactorProvider, AuthorizationProvider, multiple authentication scheme handlers and so on. This gives you the ability to refer ASPSecurityKit in such things as background jobs, to run those in the context of certain security identity for example, without having to bring the huge dependency of the web components. In ISCP, we leveraged this capability to run account/tax/reporting jobs in the context of desired provider identity – which was defaulted to use the default custodian provider context but could be easily changed to use other contexts as and when needed.

The zero-trust security model assumes breach as the default phenomenon and therefore, it advocates verifying every request with all possible options available to ensure the legitimacy of the request. It also emphasizes following the principle of least privilege access to limit access to the system for only the functions requested even though the elevated privilege might be available for the caller.

A Source package is like a project template – given to you in source form – which you’re free to build your project upon. However, that’s where the similarity ends. ASPSecurityKit Source Packages are more like libraries with fully functional components – installed as source code – giving you crucial security features or workflows, commonly needed in all multi-user web applications. For example, login/register, two-factor auth, forgot password, account settings - username/password/2FA, email verification, user/permission management etc.

Additionally, these packages include source code of models, repositories, migrations, DI configurations, etc. that you need to wire up security components and workflows into a fully functioning web application base that you can use to build upon business features of your project.

Source packages are available for all the supported web frameworks, and you can even start using ASPSecurityKit in an existing project with the Essential source package. For more information, visit the source packages page.